This is an original gun.  It was made in the early 1700s and has been from Europe to America by boat on three trips as shown by the stamps on the barrel. It has remained in my family through all the early wars of the country up until the American Civil War where it was retired and put in the closet.

As you hold this beauty in the hand she sings you stories of battles fought and live stock defended.  In the attached pictures I've included you can see on the end of the barrel a very worn spot.  That is from sliding it out from under the bed to defend live stock from wolves back in the early days.

This gun means a great deal to the history of my family.  The ram rod isn't original but it is the one used until it's retirement.

Enjoy my friends and thanks for checking it out.  This won't be the last time you see her.

​Randy Starks is sharing a gage d mor project.  He states it is easy to make and he followed the one in the Mountain Man Sketchbook Volume one and the pictures on Pinterest.  The pipe was the most expensive to buy, the beading takes awhile but a nice easy few hour project. 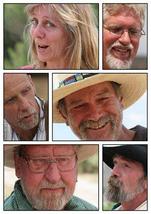